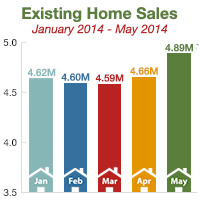 The National Association of REALTORS® reported that Existing Home Sales were up 4.9 percent from May to April, reaching an annual rate of 4.89 million units. That’s the highest monthly rate since the 5.5 percent recorded in August 2011. Existing Home Sales is a measure of the selling rate of pre-owned, single-family homes, which accounts for over 80 percent of all houses sold.

New Home Sales, which tracks never before occupied homes, challenged the analysts by rising to a 6-year high in May. According to the U.S. Census Bureau, 504,000 new homes were sold. This was an 18.6 percent increase over April, marking the largest single-month increase in 22 years!

And according to the S&P/Case-Shiller Home Price Index—which measures changes in values between sales and is compiled into an index for select U.S. cities—all 20 tracked markets climbed nationwide in April.

What’s the bottom line? While the supply of homes for sale has dwindled to an 11-month low overall, prices are going up, albeit at a much slower pace than in 2013. It remains to be seen whether the housing market will continue to expand through the summer, but it’s clear that great deals are here today.

I’ll continue to monitor home sales and all other major economic reports, and keep you posted on their impact on the markets and home loan rates. But if you have any immediate questions, please call or email today.