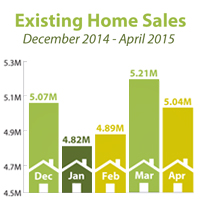 On the surface, April Existing Home Sales were a disappointment. But taking a long-term view sharpens the detail.

What is the Existing Home Sales report? The Existing Home Sales report measures sales of pre-owned single-family homes, as reported by the National Association of REALTORS® (NAR) from 650 local associations. It covers geographical numbers, prices and inventory, and the number of months it would take to deplete the existing supply of pre-owned houses.

What’s happened recently? NAR reported April’s Existing Home Sales fell by 3.3 percent from March to an annual rate of 5.04 million, below the 5.24 million expected. Despite the decline, sales have increased on an annual basis for seven consecutive months and are up 6.1 percent from a year ago. The median price was $219,000, nearly 9 percent above April 2014, but more importantly, this was the 38th consecutive month of year-over-year price gains.

What’s the bottom line? NAR Chief Economist Lawrence Yun said, “April’s setback is the result of lagging supply relative to demand and the upward pressure it’s putting on prices.” Because housing inventory declined from last year, supply in many markets is very tight, which can lead to bidding wars, faster price growth, and properties selling at a quicker pace.

I’ll continue to monitor all housing and economic reports closely. If you have any immediate questions, please call or email today.