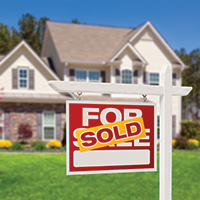 Recent data suggests a rebound in the housing market. The National Association of Home Builders Housing Market Index rose to 61—the highest reading since November 2005. This survey gauges builder confidence on single-family home sales and expectations for the next six months, and any number over 50 indicates “good” conditions. In other building news, the Commerce Department reported Housing Starts are approaching an eight-year high.

The National Association of REALTORS® (NAR) also reported Existing Home Sales were up 2 percent in July from June, the fastest pace since February 2007. Year-over-year sales are up 10 percent overall. NAR also reported that low inventories—currently at about half of where they were during the top of the housing boom—have driven sale prices higher in many markets.

The second of three quarterly readings for Gross Domestic Product (GDP) showed that the economy expanded by 3.7 percent in the second quarter. GDP measures the monetary value of all the finished goods and services produced within the country, and these gains were led by an increase in business investments and an uptick in consumer spending. The second quarter reading shows that the U.S. economy is steadily improving, which is a relief after the anemic GDP reading of just 0.6 percent in the first quarter.

China is a different story, however, as its Stock market has been rocked by significant losses in recent weeks. This has caused volatility in markets around the world, including U.S. Stock and Bond markets.

The Fed is closely monitoring the news overseas as well as economic activity here at home as it decides when to raise its benchmark Federal Funds Rate, which is the rate banks use to lend money to each other overnight. While this does not directly raise home loan rates, consumer rates or lines of credit, these too often increase when the Fed Funds Rate climbs, depending on the market and overall economy. Analysts and traders have differing opinions whether the Fed will act this year or wait until 2016, and they will be watching the September Fed meeting closely to see how things play out.

Home loan rates continue to remain near historic lows, and now is a great time to consider a home purchase or refinance. As always, please let me know if you have any questions.