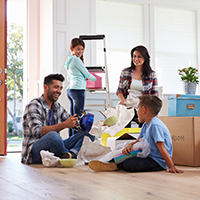 Housing Starts, which measure when excavation begins on a home, surged 25.5 percent in October from September. It was the highest level since September 2007. Single-family starts, which make up the largest share of the market, jumped nearly 11 percent, while multi-dwelling starts skyrocketed by 68 percent. From October 2015 to October 2016, Housing Starts were up 23.3 percent.

The Commerce Department reported New Home Sales are up 17.8 percent from October 2015 to October 2016. While month-to-month sales unexpectedly declined in October from September, and September’s figure was also revised lower, the decline seems to be a temporary setback being that the job market continues to strengthen. The median sales price also increased.

Existing Home Sales hit a record high in nearly a decade in October. See more on this story in the What to Watch section below.

Economy Also Picking Up Steam After weak economic growth to begin 2016, the Bureau of Economic Analysis reported that the second reading of third quarter Gross Domestic Product (GDP) surged ahead by 3.2 percent. This was the fastest pace in two years. GDP is the monetary value of all finished goods and services produced in a specific timeframe, and it is considered the broadest measure of economic activity.

Over in the employment sector, the Labor Department reported U.S. employers added 178,000 new workers in November, which was near the 180,000 expected. The Unemployment Rate fell to 4.6 percent, the lowest level since August 2007. However, the low unemployment rate was due in part to some unemployed Americans dropping out of the workforce.

A strengthening job market is crucial for the housing industry as well as retailers, as consumers head into the holiday shopping season for the year-end boost in the U.S. economy. The Commerce Department reported that Retail Sales in October rose 0.8 percent, while September’s numbers were revised higher. The positive numbers in September and October were the best two-month rise since early 2014. Retail Sales are up 4.3 percent from a year ago.

Markets Remain Volatile Market volatility has been intense since the presidential election, with Stock prices moving higher while Mortgage Bonds — and the home loan rates tied to them — worsened in the immediate aftermath. Investors may feel the Trump win is more Stock-market friendly with potential tax cuts, deregulation, and higher defense and infrastructure spending. There is also speculation that the president elect’s policies could spur a rise in inflation.

While home loan rates have edged higher following the election, they are still in attractive territory.