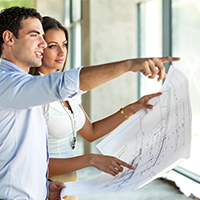 For Existing Home Sales, 2016 was the best year in a decade, even though December’s numbers declined 2.8 percent from November. The National Association of REALTORS® reported total sales in 2016 of 5.45 million units on an annualized basis, the highest since 2006.

December New Home Sales reached the lowest level since February 2015, falling 10.4 percent from November. Although the news was disappointing, data showed a near six-month supply of new homes for sale, which finally signals a healthy balance between supply and demand.

Meanwhile, Housing Starts, a measure of new construction, surged 11.3 percent from November to December, signaling November’s pull-back from October may have been an anomaly. The report also revealed multifamily dwellings rebounded in December, while single-family starts were modestly lower. For all of 2016, Housing Starts of 1.17 million units were at their best since 2007. This is a good sign for areas struggling with limited inventory.

Jobs, Spending on the Upswing A strong labor market can help put more families in a position to buy homes, and January’s numbers suggest, in part, that the labor sector kicked off 2017 on a high note. The Labor Department reported that U.S. employers hired 227,000 new workers in January, well above the 170,000 expected.

Spending was also on the upswing as 2016 came to a close. The Commerce Department reported Retail Sales rose 0.6 percent from November to December due in part to strong auto sales. Overall, sales were up 3.3 percent for 2016 after a 2.3 percent gain in 2015. Investors will be looking to see if this momentum continues in 2017.

The Bottom Line After a steep drop immediately after the election, Mortgage Bonds have been trading in a narrow range more recently as investors assess incoming economic data. This is important since home loan rates are tied to Mortgage Bonds. Home loan rates remain in attractive territory near historic lows, and provide great opportunities for homebuyers and homeowners considering a refinance.