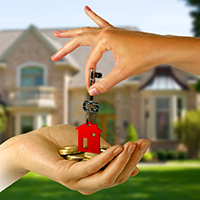 Summer often signals a jump in housing activity. This year was no exception. The National Association of REALTORS® reported June Existing Home Sales rose by 1.1 percent from May and were up 3 percent from June of last year, remaining at their highest pace since February 2007. New Home Sales also warmed 3.5 percent above May’s reading, marking a 25.4 percent gain over last June and the highest level since February 2008.

Framing the Future
Housing inventory could get a much-needed boost. Building Permit applications rose 1.5 percent in May, while Housing Starts, which measure when excavation begins on a home, rose 4.89 percent. Both readings were above expectations. Single-family starts, the largest segment of our housing economy, increased 4.4 percent.

While the housing market remains a bright spot in our economy, other areas are still struggling.

Jobs and Wages Slow
Stagnant job and wage growth continue to dismay U.S. markets and economists. The Bureau of Labor Statistics reported 287,000 jobs created in June. While this was well above expectations, exuberance was hampered by a downward revision in May’s numbers, to a paltry 11,000 jobs created. From the period April to June 2016, job growth has averaged 147,000 per month, well below the five-year high of 282,000 new jobs per month seen in the fourth quarter of 2015.

Unemployment ticked up to 4.9 percent, and average hourly earnings rose by a modest 0.1 percent. The good news is hourly wages did increase 2.6 percent from this time last year, matching the highest level of the recovery since 2009.

What the Fed Said
The most recent Federal Open Market Committee meeting in July left the Federal Funds Rate (the benchmark interest rate at which banks lend to each other overnight) unchanged, meeting market expectations. In a statement released after the meeting, the Fed said it would continue to monitor inflation and other economic reports here and around the world.

In general, when economic data is weak, or there is uncertainty overseas like Britain’s recent decision to exit the European Union, investors tend to move money out of riskier investments like Stocks and into Bonds. And because home loan rates are tied to Mortgage Bonds, when Mortgage Bonds improve home loan rates often follow.

The bottom line is that home loan rates remain near historic lows. If you have any questions about housing or home loan rates, or if you’d like to discuss your unique situation, please call or email today.